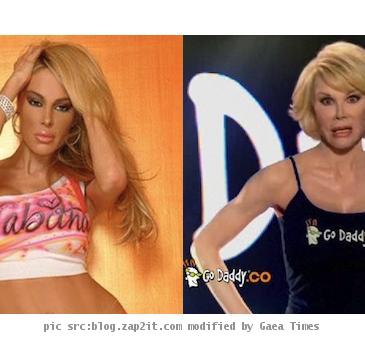 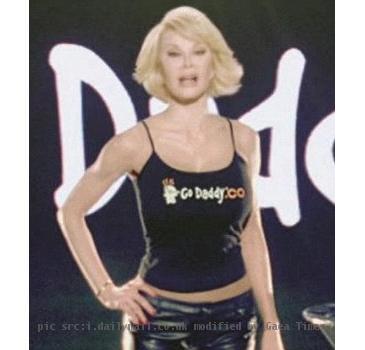 LOS ANGELES (GaeaTimes.com)- Out of all Super Bowl XLV commercials, it seems that the Go Daddy commercial hogged the maximum limelight as it showed 77 year old Joan Rivers in a completely new avatar. On Sunday night, all the viewers were somehow astounded to see the comedian in a tight fitted top and hot leather pants. Joan Rivers took to the social networking site to state that she did not use any body double and it was her prim and proper body. On the other hand, media outlet came up with the news that the Go Daddy officials have used a body double model Tabitha Taylor, who made her look so picture perfect.

On the other hand, Joan Rivers has strongly denied all the speculations about Tabitha Taylor’s body and insisted on the fact that it was her body that was used in the commercial. The actress and comedian tweeted, “Yes, yes, yes, it’s my body in the @GoDaddy ad”. She also stated that “New York Knicks” couldn’t be only ones to have the pleasure of a perfect body. Bill y Rush, the host of a reputed network replied to her tweet by stating that body double for Joan Rivers is Tabitha Taylor. The comedian instantly replied to the tweet asking “what double?” However, Joan Rivers also thanked the Go Daddy company for the commercial, which made her get all the media attention for her “gorgeous body”.

Joan Rivers, later stated that all other commercials, except Go Daddy, were all alcoholics, aliens and computer-generated. Joan Rivers completely rubbished Billy Rush’s claim about Tabitha Taylor and stated that she is the new Go Daddy girl and she had to work hard to get a “hot new body” to match. Moreover, the also insisted that the Go Daddy commercial does not have any special effects.

NEW DELHI - Doping continues to haunt Nigerian athletes even after the closing ceremony of the XI...

NEW DELHI - The following are results on the fifth day of the Commonwealth Games here Friday. A...

Ellen DeGeneres On "So You Think You Can Dance"

Prosecutors: Young Canadian comforted himself at Gitmo by thinking about killing US soldier