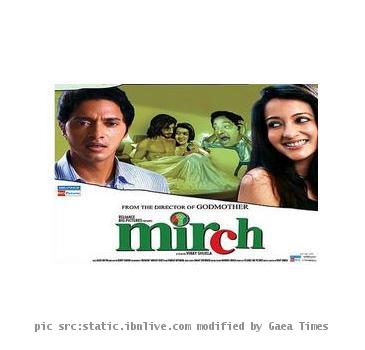 MUMBAI, INDIA (GaeaTimes.com)- ‘Mirch,‘ a sex comedy with a modern take on women’s sexuality has been released in India which has some of the noted actors of Bollywood playing key roles. The film which has been directed by Vinay Shukla, has the right ingredients to stand out in the crowd of sex comedies that try to extract laughter through forcibly used mechanisms but ends up as a half cooked meal. The movie shows a struggling director-writer Manav taking a tale from Panchatantra where a woman caught cheating on her husband, manages to convince the husband with her presence of mind. There are 4 such stories in the film and they are linked in a way.

The stories shown in the movie ‘Mirch’ are really interesting especially the duo that are set in ancient times. The role of the two adulterous women have been played by talented actress Konkona Sen Sharma and Raima Sen. They also play the role of the two women in these stories set in present times but these tales are not as interesting as the older ones. The drawback of the movie is the wooden acting of actor Arunoday Singh who plays a pivotal role in the movie. He, however, manages to show more skin than the women! However, some critics feel that the ending of the flick appears confused and there are also few other glitches in the storyline.

Both the actresses in ‘Mirch‘ excel as sexually liberated women, something that we do not come across in mainstream Indian movies. The movie manages to raise the sensitive topic of women’s libido but the execution of the subject leaves much to be desired, critics have reiterated.