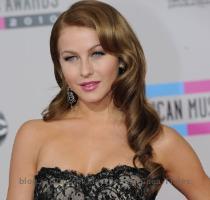 LOS ANGELES (GaeaTimes.com)- The ultra sensuous Julianne Hough is back with yet another sizzling single ‘Is That So Wrong’ and many people think that it is wrong indeed. The hot and sultry video, where the 22-year-old scrolls all over her bed with abnormally indicative somersaults, sporting just the minimal clothes to enigmatically cover up her essentials, has already created controversy. Julianne Hough’s video, has therefore been banned by Country Music Television (CMT).

Where the sensible people comply to the decision of CMT, others, who love setting their libido on fire, are struggling to get a glance of it on Youtube. Unfortunately,the video featuring Julianne Hough is unavailable on Youtube as well. Julianne Hough herself said that CMT has banned that video because, she was shedding too many clothes while she was dancing around her room. Although the hot singer said that she does not regret shooting it, because it was so much fun for her, CMT had some other explanations to give. They, reportedly, called it off because, they apparently had some negotiation problems with the star. However, they have also assured that they would put it back the moment their problem gets resolved. Till then, her lusty fans have to keep on craving for it.

Whatever the matter may be, one cannot deny that Julianne Hough made every effort to seduce her fans in every possible way through ‘Is That So Wrong’. It seems that after Miley Cyrus, it is her turn to shed her ‘good girl’ image, and the easiest way to do that is definitely by releasing a steamy video. All those who were lucky enough to watch the video, not only said that she has a highly tempting body, but would also appreciate her oomphy seduction skills and meandering somersaults.

SYDNEY - Julianne Moore doesn't think that going under the knife would make any difference to her ap...

LONDON - Julianne Moore broke down in tears while talking about her late mother during a recent i...

Julianne Moore was teased over hair in school

LONDON - Actress Julianne Moore has revealed that she used to get teased by her schoolmates for havi...
Copyright© 2010 The Gaea Times