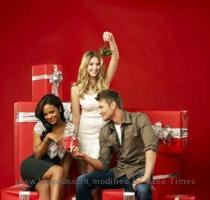 LOS ANGELES (GaeaTimes.com)- “Christmas Cupid”, the much awaited original ABC movie was premiered yesterday at 8 p.m. ET/PT. It is an ABC Family’s new holiday movie, that aims to uplift the festive mood this season. The story revolves around the life of Sloane Spencer, played by Christina Milian, a high profile Hollywood publicist, who is constantly guided by a ghost to change her perspective towards life.

“Christmas Cupid” was a special movie for the lead actress, who is accompanied by other stars like Chad Michael Murray, Ashley Benson, Ryan Sypek, Sharon Morris, Reagan Michelle and many more. Christina Milian, in an interview described her character as a modern girl, who loves to lead a high profile and powerful lifestyle as a PR in Hollywood. All she is concerned about, is her career and moving up in life. She said that Sloane Spencer is rather a cold spirited girl, for whom the other softer virtues make the least sense. She loves dating only those men who would help in her career. However, a ghost, played by Ashley Benson helps her in changing her outlook in the movie. Reportedly, the two beautiful actresses share a very good term and gelled really well on the sets. Christina Milian said that Ashley Benson is a sweetheart, and they share very similar personalities although the latter is funnier than her. The two actresses have worked together in “Bring it On” before, and therefore sharing the screen once again was like a blast from the past.

However, despite the actors gelling well, “Christmas Cupid” did not turn out to be as good as it was expected. It was rather dry and lacked originality. The story line of the film was very much similar to that of “Christmas Carol” by Charles Dickens, only with some modern inputs.