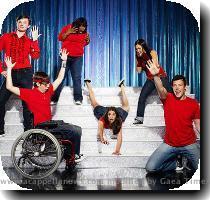 LOS ANGELES, (GaeaTimes.com)- It was a great “Glee” episode yesterday evening as many things that the audiences were expecting to take place since quite long were actually materialized. For long, the audiences were dying to find out who would be the probable new love interest of Kurt, and “Never Been Kissed” gave the answer yesterday.

With the introduction of Blaine on “Glee” “Never Been Kissed” episode, a gay boy from the rival glee club, the Dalton Academy Warblers, things became quite apparent that Kurt and Blaine would fall in love. The show revealed that Kurt and Coach Beiste have never been kissed before. However that no longer remains true, as Kurt meets Blaine while he was performing “Teenage Dreams”. The butterflies in his stomach could easily be perceived through his expressions and every one were sure, that the two would find love interest in each other. Although the relationship would remain platonic for a few more episodes, it will take a serious turn as season two moves forward. There were other significant issues that were taken up the “Never Been Kissed”. One of them was Kurt subjection to bullying with Diva Rachel, which became an important focus of the show yesterday. Noah “Puck” Puckerman was back was back yesterday with a leading role, who gets back on track with the help of Artie. On the other hand Sam, who opened the show yesterday, gave a good amount of titillation to the audience with his skin show in the boys’ locker room.

The “Glee” “Never Been Kissed” episode featured many beautiful songs like “Teenage Dreams” by Katy Perry, “One Love/People Get Ready” by Bob Marley & the Wailers, “Start Me Up” with Bon Jovi’s “Livin’ on a Prayer”, “Stop! In the Name of Love” and “Free your mind”. Yesterday’s episode was directed by Bradley Buecker and written by Brad Falchuk.