Drake And Nicki Minaj Tweet About Tying The Knot 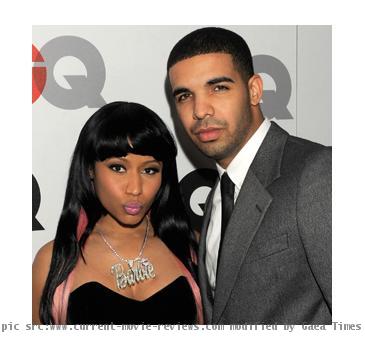 LOS ANGELES (GaeaTimes.com)- Canadian rapper Drake is now a married man. The “Miss Me” singer divulged through his profile on the social-networking site Twitter that he had tied the knot with none other than Nicki Minaj. If the 23-year-old singer was prompt enough to announce to the world that he had exchanged vows with Nicki Minaj, the “BedRock” rapper did not waste much time to confirm that news of their marriage through the same social-networking site. Despite the fact that the ‘newly-married’ couple have revealed that they are indeed married to each other, many of their fans are still finding it hard to believe given the fact that the representative of both the singers has been unavailable for any kind of comments in this regard.

The entire buzz surrounding the marriage of Drake and Nicki Minaj gained momentum after the Trinidadian American rapper asked the 23-year-old singer whether he was scared to announce the news to the world. About an hour later, Drake responded by saying that he was anything but scared and instead it made him proud to let the world know that Nicki Minaj should from now on be referred to as Mrs. Aubrey Drake Graham while he also added that “She’s finally mine.” The “Your Love” singer then re-tweeted that the news that Drake had revealed is indeed true and confirmed that now they are a married couple.

In the month of June, Drake in known to have told a news source that was genuinely in love with Nicki Minaj and had a crush on her for long time. However, back then the revelation was refuted by the hip-hop diva who stressed that these were just means to seize attention.

Earth may have had water 'from the day it was born'

LONDON - A new study claims that Earth may have had water on its surface right since the day the pla...