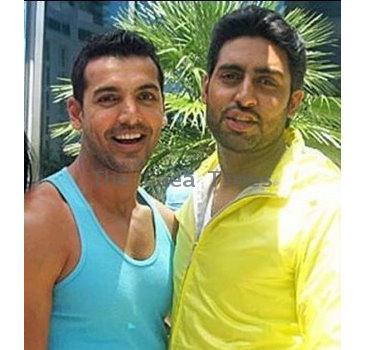 August 2, 2010 (Sampurn Wire): India celebrated Friendship Day yesterday. Each nook and corner of the country was filled with an air of celebration. Friends tie friendship bands on each other’s hands and embrace each other to make much of the day. A mix of true and fake friendships is aplenty in Bollywood. Some have survived the odds of times while others have come upon the rocks. Even the rivals are friends in public. However, some Bollywood stars have a high time on this specific day. Here is a glimpse of the strongest friendships that the contemporary Bollywood is known for.

The dostana of John Abraham and Abhishek Bachchan has been in the Bollywood air since the release of Dostana. They are in touch and exchanging gifts with each other. Kareen Kapoor not friendly with everyone has surprisingly been in friendly terms with Amrita Arora for a long time. Bebo was bridesmaid at Amrita’s wedding.

Karan Johar and Shah Rukh Khan, two Bollywood biggies are known for their romantic kind of friendship. The duo damn care the public rumors about their friendship. SRK and Juhi have shared the on-screen space in several movies. They are good business partners in real life as well. Hence, their friendship has to be strong.

The friendship of Sanjay Dutt and Sunil Shetty is the oldest one that has braved all odds to remain evergreen. In Bollywood, the friendship of David Dhawan and Govinda is a special mention. David Dhawan, the guru and guide of Govinda, has been the driving force behind the latter’s career in films.