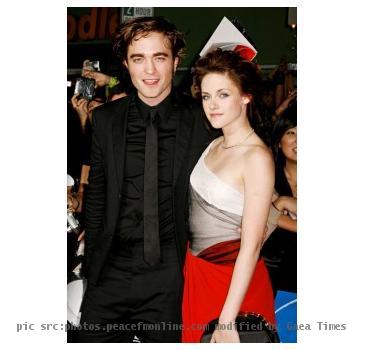 LOS ANGELES (GaeaTimes.com)- When the most attractive vampire and the werewolf with a six pack abs descends on Los Angeles can monster lovers stay away? That explains why the Twilight fans thronged in huge numbers in Los Angeles to attend the premiere of ‘Eclipse‘ the third movie in the Twilight saga. The lead actors of the film namely Taylor Lautner, Kristen Stewart, and Robert Pattinson attended the premiere and walked the black carpet. The carpet was black to match the dark theme of the vampire flick.

As one can understand the reports and representatives of media entities were busy taking interview of the actors and the shutterbugs could not stop taking their photos. The actors obliged them, and also waved to the fans camping outside the venue for several hours. The fans did not stop shouting ever since they saw the gorgeous twosome- Taylor Lautner and Robert Pattinson descending. A number of fans brought placards to show how they love their favorite stars. Robert Pattinson seemed at ease and said he felt happy with the way the Twilight franchisee is shaping up with time. Dakota Fanning was quite stunned by the fan frenzy at the ‘Eclipse’ premiere. She admitted it took her by surprise.

‘Eclipse‘ has generated much interest among the ‘Twilight’ fans and the promotion has also fueled the hype around the movie. It is going to get released in the UK next month. The premiere was also attended by a number of stars and actors like Kim Kardashian and Kourtney Kardashian, Jennifer Love Hewitt and Alex Rodriguez, among others.