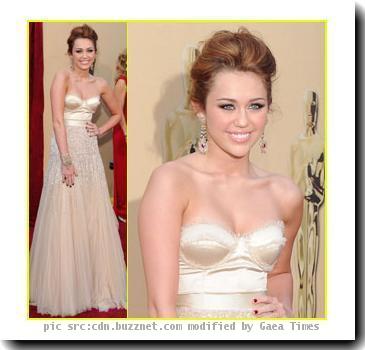 Among the other actresses, Sandra Bullock wore a silverfish Marchesa gown. Amanda Seyfried walked in the Academy Awards in a soft green silk strapless gown by Armani Prive. It was crusted with Swarovski crystals with a modern chic. It is put together by Harry Josh. SVU actress Mariska Hargity wore a beautiful blue Vera Wang gown. The jewelry of her was designed by Fred Leighton.

Miley Cyrus was interviewed by Ryan Seacrest on the red carpet. She was asked if she was in love with her The Last Song co-star Liam Hemsworth. She replied,

Miley Cyrus is reportedly presenting the Oscar for Best Song.
Though she looked gorgeous in that dress, some fashionistas say that she looked tiny in that dress and her eye lashes were huge and it was obviously some false ones.

If you don’t know who Miley Cyrus is, you should know that she is an American Pop singer, songwriter as well as a television and film actress. She was famous after her Disney Channel series Hannah Montana. After the success of Hannah Montana she began her solo music career with her debut album of which See You Again became very popular. She was born on November 23, 1992 and is only 17 years old as of now.