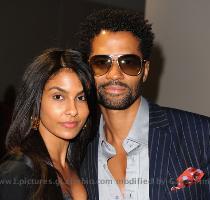 LOS ANGELES (GaeaTimes.com)- Singer Eric Benet recently announced that he is engaged to lady love Manuela Testolini. The couple are the latest ones to confirm of their engagement. Hold on this is not just the end of it. Anyone especially the ladies who hears the story of the proposal is sure to envy the couple! The 44 year old actor literally went on his knees proposing Manuela Testolini with a ring that he has designed all by himself!

No matter even if the incident raises the eyebrows of the gossip-mongers of the tinsel town, the couple certainly is in no mood to pay them any kind of heed for they are busy replenishing their new development in their lives far away in the mystic land of Egypt. A little birdie claimed that the two are right now holidaying in the African nation. The two however, have known each other for a long time. They have been dating each other since the last three years. The singer split from his Hollywood star wife Halle Berry way back in 2006. Incidentally, Manuela Testolini too called off her marriage the very same year. She was married to singer Prince from 2001 to 2006.

Eric Benet claims that Manuela Testolini who is an entrepreneur and founder of the charity named “In A Perfect World” that looks after children, is the perfect soul-mate for him. It was back in last year November when Eric Benet had proposed Manuela Testolini for marriage during a romantic dinner date. The singer stuck to his usual way of singing by popping the question to her through a song “Never Want to Live Without You” which is from his new album.

WASHINGTON - For the first time ever, scientists at Rochester Institute of Technology have achieve...

From a mud hut to Paris - the Roma life struggle

CHEVERESUL MARE - The day is cold and damp and Miron Neda, 52, is wearing his Sunday suit with plast...

Years after floods, frustrated homeowners still waiting for FEMA to buy them out