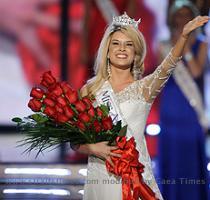 LAS VEGAS (GaeaTimes.com)- It was a star-studded night at the sin city of Las Vegas on Saturday as the Miss America 2011 contestants adorned Planet Hollywood casino-resort for the annual beauty pageant. Held on Saturday night, the title was claimed by the 17-year-old Miss Nebraska Teresa Scanlan followed by Miss Arkansas Alyse Eady as the first runner-up and Miss Hawaii Jalee Fuselier, the second runner-up. The top three had given a tough competition to the other 50 beautiful ladies from all over the nation to notch the top slots.

Although several of the 53 contestants won the hearts of many through the course of the contest, the final victory was achieved by Teresa Scanlan, who is the youngest winner since 1921 when Margaret Gorman of the District of Columbia had won the crown at the age of 15. However, both the judges and organizers claimed that every contestant was a winner in herself for making it to the national platform in itself was a big achievement. Through the contest it had evolved that every young beauty out there was immensely talented for many of them proved themselves by clinching several sub-titles. Not only was fitness and beauty the foremost criteria for the Miss America beauty pageant, it demanded a perfect combination of brain with beauty. The Miss America 2011 panel of seven judges clearly observed the interview part of every finalist before hosts Brooke Burke and Chris Harrison announced the final winners.

The 53 contestants were first shortlisted to a fifteen, from which again it was cut down to twelve. Then again, ten names were selected, ultimately taking five to the last round. Along with the three, other contestants who made it to the top five of the Miss America 2011 pageant were Miss Oklahoma Emoly West, and Miss Washington Jacquie Brown.