Robert Pattinson and Kristen Stewart are the “Most Stylish Celebrity Couple” 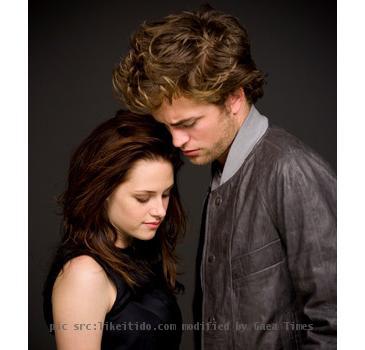 The young pair, who are famous for the role of onscreen lovers- Edward and Bella in the famous vampire franchise Twilight, are also dating each other in real life. According to the critics, Pattinson’s “school boy image” and Stewart’s “laidback American approach” has earned them this honor.

The pair paved its way ahead of fashionable Sex And The City star Sarah Jessica Parker and husband Matthew Broderick, while Pirates Of the Carribean star Johnny Depp with wife Vanessa Paradis clinched the third slot. Other celebrity couples who made it to the top 10 included actors Demi Moore and Ashton Kutcher, pop star Jennifer Lopez and husband Marc Anthony
and High School Musical stars Zac Efron and Vanessa Hudgens.

Surprisingly, the “Hot and happening” couple of Hollywood, Angelina Jolie and Brad Pitt (Together called “Brangelina”) were left way behind in the list, landing at number 23 amongst top 25.

What do you say folks? Are vampires getting too sexy for “Mr. and Mrs. Smith“? Is this the birth of new power couple? Feel free to share your thoughts with us.