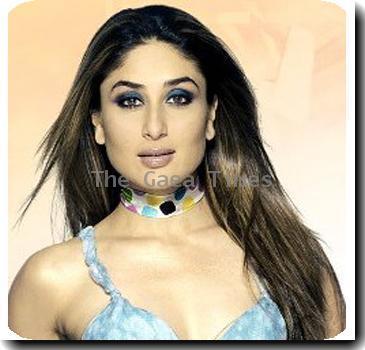 MUMBAI, INDIA (GaeaTimes.com)- Actress Kareena Kapoor is basking in the success of her latest release Golmaal 3. She seems to be unperturbed after getting dropped from he much touted ‘Heroine’ of ace director Madhur Bhandarkar. The actress who gave her solo hit film long back is nowadays seen doing a number of ad and commercials. Even though her on screen pairing with his real life boyfriend actor Saif Ali Khan has not created any magic at the box office the companies running after her see to think differently. Their on screen ventures like ‘Tashan’ and ‘Kurbaan’ turned out to be box office duds. However, the couple was recently seen doing an ad for Metro shoes. They also attended a media event recently in this connection.

While actor Saif Ali Khan wore a white shirt with a cool black tuxedo, Kareena Kapoor was wearing a Red dress with a black belt. The couple apologized to the event organizers as they reached the venue late owing to a traffic jam. The ‘Love Aaj Kal’ actor was in a flamboyant mood and he gave a nice speech on why he chose to do the endorsement. Kareena Kapoor was also smiling a lot during the event and she looked every bit the ideal girlfriend with her fiance.

On the professional front Kareena Kapoor is being approached by a number of directors but she hardly has dates for them. Despite her long list of flop films the ace directors want her to work with them. She has become selective these days and does not do too many films at a time.

MUMBAI, INDIA (GaeaTimes.com)- There were much speculations regarding the fate of the two Di...

I was ignorant about Chittagong uprising: Abhishek Bachchan

SHIMLA - After box-office dud "Raavan", Abhishek Bachchan is returning to the big screen as freedom ...