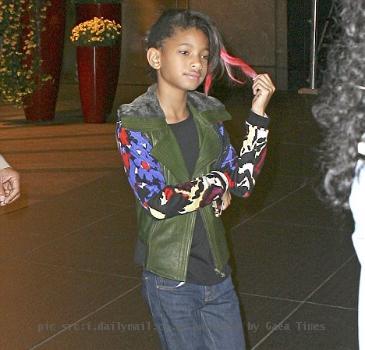 LOS ANGELES (GaeaTimes.com)- Willow Smith, the daughter of Will Smith and Jada Pinkett Smith is presently basking in the glory of the success of her music video “Whip My Hair”. The music video has gone viral on web and media outlets reported that the song has already received 600,000 viewers in less than 24 hours. The 9 year old singer is seen whipping her hair in the video and restoring life to an old white classroom where the students were bored to death.

The music pundits have reportedly said that “Whip My Hair” by Willow Smith is sure to become teen anthem in a very short span of time. Previously in one of her interviews Willow Smith said that the meaning of her song “Whip My Hair” is that the singer is asking everyone to be just an individual and not bow down in front of anybody else. She said that one can not be afraid of oneself and one should not be dictated by others in his life. Willow Smith spoke about the music video in one of her interviews where she said that it is an amazing feeling for her and at the same time her hard work has paid off.

Willow Smith also recalled her meeting with Jay-Z while recording for the song. One of the most striking feature of the music video is that Willow Smith is seen sporting different trendy dresses with unique hairstyles. The song has already created rage in the internet and the director of the music video “Whip My Hair”, Ray Kay reportedly told in one of his interviews to a reputed media source that Willow Smith has already become a trend-setter and after watching the video, people will be inspired to speak for themselves.