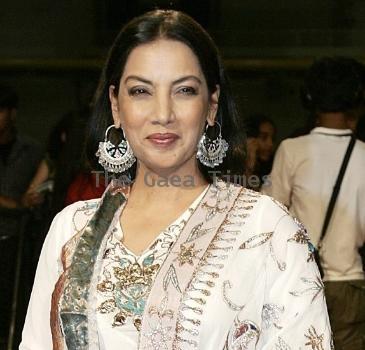 September 21, 2010 (Sampurn Wire): This has got to be the most rocking birthday party in living history. To say the ageless Shabana Azmi turned 60 with a bang on Saturday at the lounge Trilogy,would be an understatement.

Shabana chortled the next morning , “Everybody was very amused to see Jaya and me flaunt our ambiguous dancing skills . Ash couldn’t stop explaining that her ma-in-law was on a roll….My sister-in-law Tanvi and brother Baba wouldn’t leave the dance floor. He’s such a fabulous dancer, very heavily influenced by Shammi Kapoor. Zara socho , bhai itna achcha dancer aur bahen has two left feet! Everybody danced to songs from yesteryears and of course Munni badnaam was a favourite.”

Quips Shabana, “Why are you only mentioning the glamorous brigade from Bollywood? My entire family was there. My acting professor Roshan Taneja, my classmates from the film institute Kanwaljeet, Zarina Wahab, Rita Bhaduri came to the party. All my activist friends were also there. I missed Shyam Benegal and Mahesh Bhatt who are out of the country.”

Dance Of The Evening: Shabana and Jaya dancing to Munni badnaam

Quip of the Evening: “People around her can hardly bear her for 60 years . How will they bear her that long?” Javed Akhtar when someone sang Tum jiyo hazaaron saal for his wife.

MUMBAI - Actor Akshay Khanna, who plays a funny overdoing actor in "Tees Maar Khan", would come as a...