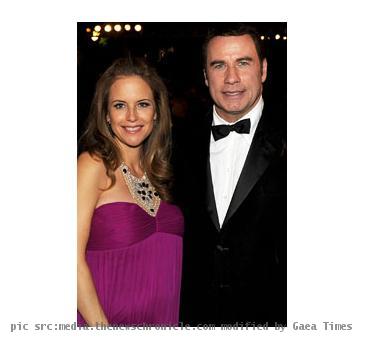 LOS ANGELES (GaeaTimes.com)-”Wild Hogs” actor John Travolta and his wife Kelly Preston must be on cloud nine right at this time as the couple is going to experience the bliss of parenthood once again. The couple announced the news to the media via their micro-blogging site on May 2010. The mother to be in her website wrote that it was “impossible” to keep a secret. However, recently Kelly Preston’s representative has reported to the media that the couple is expecting a baby boy.

John Travolta and Kelly Preston had been through tough times previously as the couple lost their 16-year-old son Jett Travolta after suffering a fatal seizure at the family’s holiday home in Bahamas in January 2009. The source close to the family told the media that the news of the baby boy has brought in happiness in family once again. The family friend of the couple said that this baby is the “healing” baby of the family. The couple has a 10-year-old daughter named Ella Bleu Travolta.

The Golden Globe award-winning actor and his wife Kelly Preston celebrated the happy news with nearly 40 close friends at a shower held at their Los Angeles area home on August 8. The co-host of the baby shower, Keisha Whitaker said that it was a “wonderful” day and the private outdoor gathering featured a three-layer cake with a bird’s nest on top of it. The couple in one of their interviews to a reputed media source said that the pregnancy is a “miracle” for them as they have tried for several and finally their dream has come true. The representative of Kelly Preston has announced that the baby boy is due in November.

I got really fat because I stopped doing drugs, says Kelly Osbourne

LONDON - Former wild child Kelly Osbourne has revealed that giving up on drugs made her gain weig...

7 men busted for playing chess at US park!

Kelly Osbourne fears she will get cancer

LONDON - Singer Kelly Osbourne says she lives in a fear of getting cancer like her mother Sharon who...

With the immense success of Farmville, Zynga has decided to gift the urban users with their all ...

WASHINGTON - Sarah Palin has slammed popular talent show in her soon to be released book 'America by...
Copyright© 2010 The Gaea Times