CHENNAI, INDIA (GaeaTimes.com) — If you are tired to see the overdosed fight sequences of Karthi in ‘Paiya’, then Karthi, rebounds with his new Tamil flick ‘Naan Mahan Alla‘, which is completely different from his previous one. Directed by Susindhran this flick is all set to hit the theaters today.

Sources have revealed that Naan Mahan Alla (NMA) is an action and romance filled thriller. The film reportedly does not have any stunt sequence until the climax. Isn’t sounds quite interesting? NMA is produced by K.E. Gnanaveljara, who has previously delivered blockbusters like Paruthiveeran and Singam. Karthi and Kajal appear as the lead roles in this flick. The music of Naan Mahan Alla is contributed by the charming Yuvan Shankar Raja. 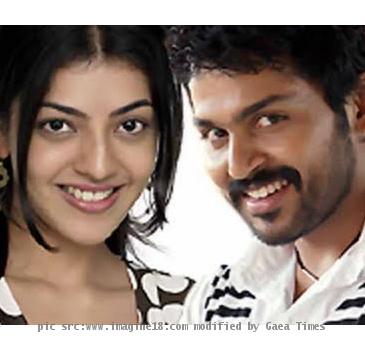 Such a great cast and crew raises the expectations of the film among the audiences. People are already excited to see beautiful famed actress of ‘Magadheera’, Kajal pairing with dashing Karthi. The story revolves around the relationship of a rich father and his son. Jeeva played by Karthi is a typical Chennai youngster, who is energetic and happy going. He falls in love with Kajal. But their romantic life take a drastic turn when Jeeva enters into the world of criminals after a certain incident.

Jayaprakash will be seen in a superb performance in the movie as Jeeva’s father. Romantic musical tracks and an amazing cast makes ‘Naan Mahan Alla’ one of the most anticipated movies of 2010. Superb production and stylish performance of Karthi makes this movie a must watch for you. What do you think? ‘Naan Mahan Alla’ can live upto its expectations!!