Library Of Congress On History Channel 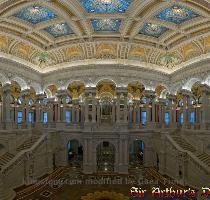 WASHINGTON (GaeaTimes.com)- The Library Of Congress which happens to be the biggest library of the world was featured in a special show as a part of the segment “Modern Marvels” on History Channel. The show depicted the interiors of Library Of Congress which preserves more than a million books and manuscripts which preserves the history of America in words and pictures.

The Thomas Jefferson building which happens to be one of the most prominent buildings of America was also showed in the same show as the viewers were offered a glimpse into the interiors of the building. This is one building which holds and preserves some of the greatest historic articles of Library Of Congress. They include the letters from the Founding Fathers, the violins of Guarneri and Stradivarius, the music compositions from Mozart that is written in his own handwriting along with the Lewis And Clark maps. The Library Of Congress show shall soon have a repeat telecast for all viewers who missed the recent broadcast.

Which E-Reader You Choose for Holiday: Kindle, Nook or Sony Reader

E-readers are expected to catch many eyeballs during the upcoming holiday season. For me, it is not...

LONDON - Scientists have found an old pinworm medicine to be a new lead in the search for compoun...

WASHINGTON - US President Barack Obama has announced that he would award the Presidential Medal of F...

How to Backup & Restore Firefox Preferences?

The great thing about working in a place that really lets you get wild with technology is that...

Obama's 'Of Thee I Sing' book a hit among Brooklyn youth

NEW YORK - US President Barack Obama's first children book 'Of Thee I Sing' has proven to be qui...

The young in Chattisgarh have education , but want it linked to careers

CHHATTISGARH - Chhattisgarh recently celebrated its 10th year of inception, a momentous landmark i...

WASHINGTON - Scientists have discovered a key enzyme in Mycobacterium tuberculosis that enables t...