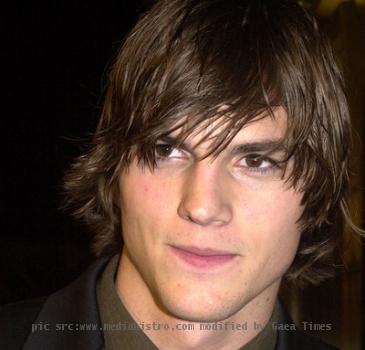 LOS ANGELES (GaeaTimes.com)- Celebrities and Twitter sure complement each other. Ashton Kutcher too is not to be left out in the race. After his gorgeous wife made an appearance on the “David Letterman Show”, it was Ashton Kutcher’s turn to talk to the man on Thursday. It was there that Ashton Kutcher decided to share his Twitter lessons with David Letterman on the “Late Night Show”.

Although throughout the entire length of the program, Ashton Kutcher was busy with his iPhone, clicking pictures of himself sitting on David Letterman’s lap, we got to hear that it was on Twitter that this arrangement was first hinted at. It is true that Ashton Kutcher maintains a regular correspondence with his fans via his Twitter account and this time too it was no different. Reports suggest that before arriving on the show, Ashton Kutcher wrote on his Twitter account that he would try sitting on the lap of the talk show host and taking a picture just like ‘Mrs. Kutcher’ had done earlier.

Ashton Kutcher seems high on Twitter snatching the crown of the most highly followed celebrity on the social networking site earlier this month. It has come to light that the actor has over a million fans on Twitter, however he faces stiff competition from pop princess Britney Spears after reports hinted to the fact that the gap between the number of people following the two stars was fast diminishing.

It is said that Ashton Kutcher uses Twitter several times a say. Well, after the David Letterman show, we feel that this number will show a rise. His fans are surely waiting for the actor’s experience on the talk show to be posted on Twitter.

Statement by the President at end of the EU-U.S. Summit

BRUSSELS - The European Union (EU) Monday rejected the general elections in Myanmar as flawed and no...

Iran to make no concessions in nuclear talks: Ahmadinejad

No agreement yet reached on nuclear talks' agenda: Tehran

TEHRAN - Tehran said Sunday that no agreement has yet been reached on the agenda of the scheduled nu...

Brussels, Oct 30 (IANS/AKI) Iran is willing to participate in negotiations regarding its nuclear pro...

Obama may offer stricter nuke deal to Iran, but it could be rejected: Officials

WASHINGTON - The Obama administration and its European allies are preparing a new offer for negotiat...

Vatican City, Oct 28 (IANS/AKI) The Vatican has condemned the death penalty given to Tariq Aziz, a t...
Copyright© 2010 The Gaea Times