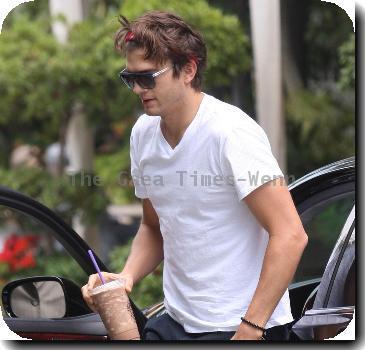 LOS ANGELES (GaeaTimes.com)-”The Ugly Truth” star Katherine Heigl is all praises for fellow actor Ashton Kutcher. In her opinion Ashton Kutcher is one of the most talented actors of Hollywood and that she had a great time while working with him on the sets of her movie “Killers”.

The 31-year-old one star feels that Ashton Kutcher looks hot without his shirt. Reportedly, Katherine Heigl has often made it to the headlines of the newspapers and gossip magazines for being outspoken. As a matter of fact this time too her comments about fellow star Ashton Kutcher has made her the center of discussion. When asked about it Katherine Heigl said that this has been a common thing which she had witnessed over the years and now she is used to it. No matter what others think she feels that it’s honest and wise to share your opinions about people. She also said that if her comments about Ashton Kutcher makes people turn out ‘awkward “against her then there isn’t anything that she can do to help them.

Reportedly, Ashton Kutcher and Katherine Heigl await the release of “Killers” which has the two of them leading the cast. Ashton Kutcher essays the role of a super spy in the movie which happens to be an action comedy. Ashton Kutcher’s character in the movie is called Spencer Aimes who meets Jen Kornfeldt (Katherine Heigl) but hides his true identity of being a spy. They both get married and start a happy life together. However, events take a sharp turn after Spencer Aimes’ birthday witness an attack. “Killers” is slotted for a June 4 release.

Statement by the President at end of the EU-U.S. Summit

BRUSSELS - The European Union (EU) Monday rejected the general elections in Myanmar as flawed and no...

Iran to make no concessions in nuclear talks: Ahmadinejad

No agreement yet reached on nuclear talks' agenda: Tehran

TEHRAN - Tehran said Sunday that no agreement has yet been reached on the agenda of the scheduled nu...

Brussels, Oct 30 (IANS/AKI) Iran is willing to participate in negotiations regarding its nuclear pro...

Obama may offer stricter nuke deal to Iran, but it could be rejected: Officials

WASHINGTON - The Obama administration and its European allies are preparing a new offer for negotiat...

Vatican City, Oct 28 (IANS/AKI) The Vatican has condemned the death penalty given to Tariq Aziz, a t...
Copyright© 2010 The Gaea Times