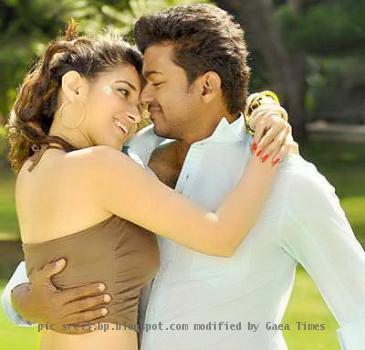 CHENNAI, INDIA (GaeaTimes.com) — Vijay starer movie Sura releases today in more than 600 theaters all over the world. Sura is much talked about film of Ilayathalapathy Vijay as he completes half-century of films with the film Sura. Tamanna Bhatia will play the lead role opposite Vijay in Sura. This will be the first time we get to see the actors pairing on the screen.

Sura is written and directed by SP Rajkumar. The film, earlier titled as Urimai Kural is produced by Sangili Murugan and distributed by Sun Pictures. Sura is considered as the landmark film for VIjay’s career as he has stated that Sura will be his last “mass” film and he will start choosing new scripts from now onwards.

Sura movie has already created hype for its stunt scenes and dance movement, as seen in the trailer. The movie has gotten ‘U’ certificate from the censor authorities that guarantees that you can watch the movie with your family.

Vijay’s fans are desperately waiting for Sura movie review. Though full details are not available right now, we manage to bring the brief story of Sura for you.

Sura has been rumored to be a remake of Malayalam film Chotta Mumbai. But according to sources, the director S P Rajkumar was only inspired by the Malayalam movie. Here Tamanna is playing the role of a bubbly college girl who makes love with Vijay. Vijay fondly called Sura is the God to the fisherman. He is very friendly and adorable. When everything is going great, a disastrous storm hit their lives in form of a smuggler. He is trying to cheat the poor fishermen so that he can snatch their land and run his own business. Now this is when Sura appears in his full from and begins actions.

There are some unique stunt scenes that will surprise you. Strong dialogues are big advantage of the movie. Vijay has done a splendid job in the dance sequences. Since the story demanded the film to be shooted in sea, Pondicherry, Kerala and Thoothukudi were chosen for the locations.

Can Vijay make his Golden Jubilee film “Sura” a blockbuster one? What do you think?