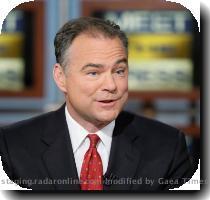 Kaine was taking calls during his final appearance on his “Ask the Governor” program when a producer announced that there was a call from “Barry in DC.” The White House says the station knew it was the president but it was a surprise to Kaine.

Kaine’s show airs on WTOP, a Washington-area radio station. The station’s Web site says Obama jokingly told Kaine he had complaints about northern Virginia’s notorious traffic. He then thanked Kaine for his service as governor and wished his family all the best during the Christmas season.

Kaine ends his term as governor in January. Obama has appointed him chairman of the Democratic National Committee.