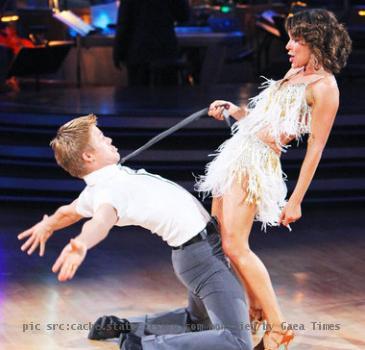 LOS ANGELES (GaeaTimes.com)- After much speculations and voting controversies, finally “Dancing with the Stars” winner was crowned yesterday on ABC and it was none other than “Dirty Dancing” actress Jennifer Grey. There were some fantastic performances by the contestants, celebrities who graced the show to cheer for their favorite contestants and also know who won the much coveted mirror ball trophy. Jennifer Grey had been consistent in her performance with her partner Derek Hough and earned a string of perfect scores and appreciation from the judges.

Jennifer Grey was excited and happy after the hosts Brooke Burke and Tom Bergeron announced her name as the winner. Derek Hough has become the first professional partner in the show who won mirror ball trophy for three consecutive times. Jennifer Grey expressed her happiness and said that she never thought she would compete in the show. The “glad” winner thanked everyone present and also her family for their love and support. Kyle Massey and his professional partner Lacey Schwimmer came second in the “Dancing with the Stars”. Though Bristol Palin’s voter support led some shocking eliminations in the show but in the end she came third.

Though “Dancing with the Stars” winner has been announced, it led to some other controversies as some bloggers are of the opinion that Jennifer Grey did not deserve to win. However, the judges agreed unanimously that Jennifer Grey deserved to win for her consistent performance and perfect scores. On the finale episode Jennifer Grey said that she worked really hard to be on the stage and do her best to woo judges. Sarah Palin’s daughter Bristol Palin expressed her disappointment, however, at the end she said that “Dancing with the Stars” has been a “life changing” experience for her.