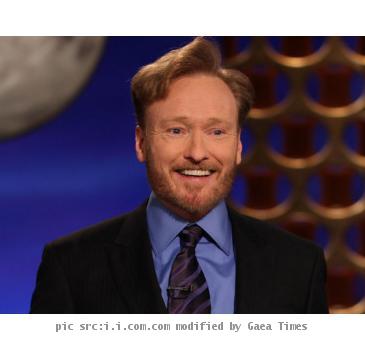 LOS ANGELES (GaeaTimes.com)- American late-night talk show featuring Conan O’Brien as host, “Conan” premiered on TBS last night with felicity and fanfare. The show pulled in millions of viewers who were riveted to their seats and the premiere episode was named as “Baa Baa Blackmail”. According to the media outlets the debut of “Conan” attracted 4,155,000 viewers with 3,285,000 viewers who were aged between 18-49. The critics are of the opinion that “Conan” ratings has crushed the ratings of every other late night shows.

The reports suggest that “Conan” ratings has also beaten David Letterman’s 3.4 million viewers, “The Daily Show With Jon Stewart” (1.3 million total viewers) and also “The Colbert Report” (1 million) viewers as well. TBS president Steve Koonin shared the happy news and said that the audience of “Conan” has been very vocal online and they have made smooth transition from “Twitter to TBS”. He also said that Conan O’Brien delivered an extraordinary audience and “Conan” stands out as the youngest talk show on television.

The premiere of “Conan” saw Arlene Wagner, Seth Rogen, Lea Michele and Jack White gracing the show and sharing some of their candid moments with the talk show host. The first segment of “Conan” includes monologue by Conan O’Brien and them at times it is accompanied by altered new clips or many brief comedy sketches. In every episode there will be one or two celebrity guests. There will also be musical or comedy performances by the celebrities. The audience enjoys Conan O’Brien’s witty comments and the sketches which keep the audience riveted to their seats. If the media reports are to be believed, then “Conan“ ratings will soar high with every episode.

LOS ANGELES, (GaeaTimes.com)- It has been long since the popular host Conan O'Brien has been awa...

Natalie Portman engages in 'gratuitous nudity' in 'Your Highness'

NEW YORK - Natalie Portman engages in gratuitous nudity in her role as Isabel for her forthcomi...

Comedian Greg Giraldo, known for rants and roasts, dies at 44 after being hospitalized

Greg the comedian is dead