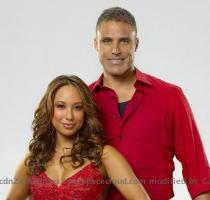 LOS ANGELES, (GaeaTimes.com)- The rocking Samba performance of Rick Fox, with his partner Cheryl Burke created a rave amongst all his fans and viewers of “Dancing With The Stars”. No one knew that the footballer could gain so much applause and appreciation with an impressive score of 24.

The footballer has always had a very competitive and hard working spirit. However, since he never had a dancing experience before, he had to put in extra efforts in order to gain the perfection with which he dances. But he also says that he has certain advantages over the others, as he need not indulge in rigorous fitness schedules like other senior performers in the show. He has been inherently fit, even though he formally left football and NBA in 2004. His experience in football, facilitates the intricacies and flexibility that is required in dancing. Rick Fox says, that he is very lucky yo have a partner like Cheryl Burke, who is a not only a wonderful dancer but also a very supportive and hardworking person to work with.

Initially, their partnership was not much appreciated as Cheryl Burke is much shorter that Rick Fox, which often leads to awkward dance moves at times. But the duo proved themselves to be equally competent, with their wonderful chemistry, which gets solidified after each performance leading to consistent improvement in their scores. In the first episode, they scored 20, which increased to 22, and by the third episode it raised to 24, bagging 8 points from each judge.

The last samba performance of Rick Fox, in Episode 3, has been one of his best performances so far. After it was over, the camera was panned towards the audiences, who received his performance his a huge round of applause, while his girl friend, Eliza Dushku, blew him a kiss as a token of appreciation.