Anil Kapoor On A High 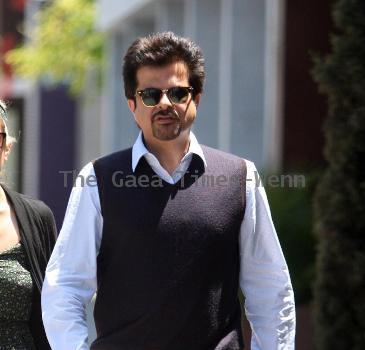 MUMBAI, INDIA (GaeaTimes.com)- Anil Kapoor is a veteran Bollywood actor whose still getting meaty roles in multi starrers and even in solo hero films where as most of his contemporaries have started playing on screen dads or have to be content with side roles!. The actor who is now 50 still looks as fit as a 30n something actor and after landing a plum role in the Oscar winning Danny Boyle film ‘Slumdog Millionaire’ he is gaining foothold even in Hollywood. The ace actor is looking forward to the upcoming Farah Khan directed Tees Maar Khan where he has a special cameo appearance. However, he is also upbeat about the role he has got in Power, a mega budget film where he is sharing screen space with Bollywood bigwigs like Amitabh Bachchan, Ajay Devgan, Sanjay Dutt and some others.

Anil Kapoor is excited about this role. The film directed by ace film maker Raj Kumar Santoshi is on floors now. The director has not revealed much about it but the media buzz suggests that Anil Kapoor will play the character of the antagonist in this film. The mahurat of the movie took place on September 22nd. The film is hogging plenty of media attention owing to the star cast and the investment going behind its production.

Anil Kapoor is very happy that he is getting the chance to work with Amitabh Bachchan in this film. He said in a recent interview that it is nothing short of a dream come true for him. The film also has 4 female actors.