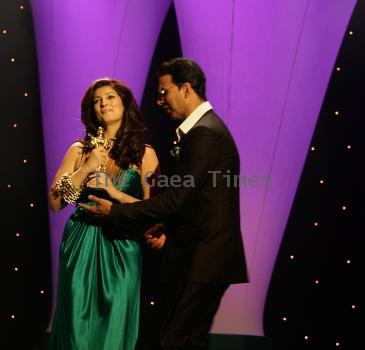 September 21, 2010 (Sampurn Wire): Farah Khan is ready to entertain audiences with all sorts of surprises up her sleeve in her forthcoming Tees Maar Khan which hits theatres this December.

This time around Farah Khan has accomplished the feat of bringing together Akshay Kumar and wife Twinkle Khanna on the silver screen together after 11 years.

The sequence shot with Twinkle Khanna is Farah ‘s signature cast and crew credit roll at the end of the movie introducing audiences to everyone who has been part of its making- a customary in all Farah Khan films.

Informs a source “The sequence filmed on the couple is a comic one starting out with Tina walking the red carpet and Akshay butting in and trying to steal the limelight only to have himself pushed out of the frame. Though it was shot impromptu no retakes were done since the scene turned out to be very funny”

For now audiences can enjoy the couple share screen space together if only for a few seconds in Tees Maar Khan also starring Katrina Kaif !

India celebrates Diwali with diyas, sweets and pujas (Round up)

Twinkle's 'Blast Before The Fast' party on Karva Chauth

MUMBAI - Akshay Kumar, who was in Toronto shooting for a music video, flew back in time for a very s...

Twinkle keeps me under control at home: Akshay

NEW DELHI - He might be a action star and a black belt holder in martial arts, but at home Akshay Ku...

MUMBAI - Its finally happening. Akshay Kumar is all set to turn DJ at the the retro music-and-dance...

LONDON - An airport in China was forced to shut down to prevent packed passenger jets crashing into ...

NEW DELHI - Punjabi singer Mika Singh recently got a chance to shake a leg with his idol, the legend...
Copyright© 2010 The Gaea Times