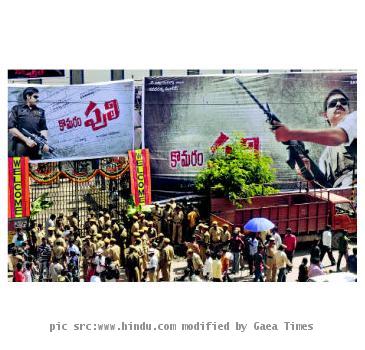 HYDERABAD, INDIA (GaeaTimes.com)- The much awaited Pawan Kalyan starrer Komaram Puli has run into trouble in Andhra Pradesh just after its release and security has been stepped up outside the theaters where the film is being screened. The film has made the hardcore Telengana activists annoyed and bowing under their pressure the producers of the newly released movie have decided to change the title of the film. The film has opened to good reviews and it has been released in more than 1,200 screens. The producer duo- C. Kalyan and Singanamala Ramesh decided to change the title of the film and they said that in a press conference.

The Osmania University students reportedly asked people not to watch the film Komaram Puli and they also threatened to stop screening. This has prompted the state government to resort to beefed up security and police picketing outside the halls in Hyderabad and other cities of the state. In the Telengana districts the JAC activists demonstrated protest march and they said they are not ok with the title since it refers to Komaram Bheem, the tribal warrior from Adilabad. They are of the view tat his name can not be used for business purposes.

Komaram Puli generated enough interest among the viewers owing to its stellar star cast and its music scored by A R Rahman. The producers said that they are sorry because the protesters are crying foul even though they have not seen the film. The other reason of opposing the film is that actor Pawan Kalyan had opposed the creation of Telengana state earlier.