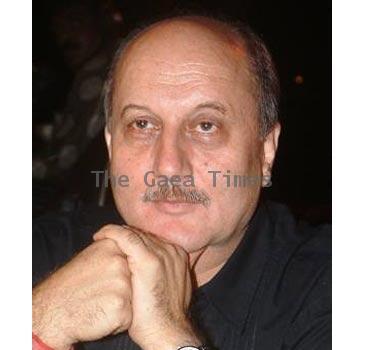 September 9, 2010 (Sampurn Wire): Artist Geeta Dass has taken her painting of Bollywood veteran Anupam Kher to exhibition, which depicted the ups and downs of the actor. On this occasion, Anupam Kher Company was launched in presence of many celebrity guests from Bollywood. The company is the parent company of the entire business lines of Kher.

The actor was present at the occasion with his wife Kirron Kher, son Sikander Kher and brother Raju Kher. Dass made 17 paintings of Anupam in just one month.

The 55 year old actor said that it was a very big day for him. He has made his acting debut with the movie ‘Saransh’ and later acted in a very serious film like ‘Maine Gandhi Ko Nahi Mara’.

The actor said that he is very happy that Geeta did not paint him as a hero and she depicted his failures in this exhibition.

The brochure of the company was launched along with megastar Amitabh Bachchan. Big B said that he was very happy to see the paintings. He added that all the ventures of Kher have been collected in this brochure and people should learn from him.

The event was attended by other stars like Juhi Chawla, Anil Kapoor, Boney Kapoor, Sridevi, Vipul Shah and his wife Shefali Shah, Sonali Bendre, Sajid Khan, Tabu and many others.