Naxals Are Deprived And Exploited, Not Terrorists, Says Sunil Shetty. 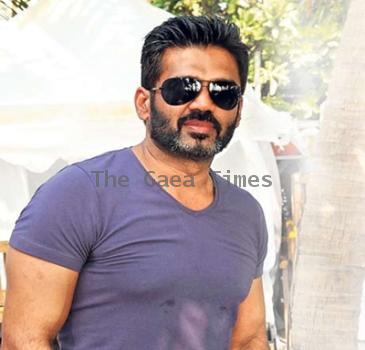 June 15, 2010 (Sampurn Wire): Bollywood hunk Suniel Shetty is best remembered for his muscles and action roles. Now, one will see a different side to his acting prowess in Anant Mahadevan’s Red Alert - The War Within, which is a realistic depiction of naxalism. If one needs proof of his scintillating performance, well, the actor has won the Best Actor Award at the international film fest, the South Asian International Film Festival (SAIFF). Obviously, the actor is elated and proud of the fact that his hard work has paid off but the award has also made him conscious of roles that he would be choosing and portraying in future.

Talking of hard work in the project, Suniel admits to turning himself inside out for the role. The guy who has played a fearless hero in all his films, in Red Alert he had to play a helpless and hapless farmer, who is lost and unkempt. He changed his body language completely. The macho man Suniel is quite comfortable with giving ’shots’ with guns but in Red Alert, he plays a farmer who holds the gun for the first time. So, director Mahadevan had him refer to the naive Dith Pran character in Roland Jaffe’s Killing Fields.

Suniel has not prepared for his role blindly. He is quite aware of the problem of naxalism. Ask him about his take on it and he admits that the problem is not plain black and white. It’s more complex than one can imagine, according to him. He opines that naxals are often helpless people who have been exploited and their mineral ores seized and their existence threatened. One cannot just eliminate or deal with them harshly because they are our own people and not terrorists. Suniel also says that it is quite disheartening that the naxal violence has taken such shocking proportions. The actor is also aware of the fact that violence can only result in violence and the Red Belt is bleeding with violence now. The more we try to get out of this complicated situation, the more we get knotted up.

Well, now one can witness the portrayal that Suniel is so passionate about when his film releases on the 9th of July, at theatres near you.

DANTEWADA - At least nine Maoists were killed in a fierce encounter with security forces in Chhattis...

PATNA - Elaborate security arrangements have been made to ensure a free and fair poll during the six...

PATNA - Campaigning for the sixth and last phase of Bihar Assembly elections comes to end this eveni...

Recruitment of Constable in CPMF is being done as per MHA scheme: Maken

NEW DELHI - Minister of State in the Ministry of Home Affairs Ajay Maken informed on Tuesday that...

Chhattisgarh tribals displaced due to Maoists

NEW DELHI - The government Monday said that Chhattisgarh is the only Maoist-hit state where tribals ...

One swallow does not make a summer in Bastar

DANTEWARA - Life for Adivasis or, the tribals in Bastar has been like traversing several time zone...

AGARTALA - The Government is all set to introduce mobile courts in Panchayats, especially in Naxal-...

NEW DELHI - There have been nearly 1,850 incidents of violence in the country's Maoist-hit areas thi...

841 people killed by Maoists till Oct 31

NEW DELHI - A total of 841 people, including 264 security personnel, were killed by Maoists till Oct...
Copyright© 2010 The Gaea Times