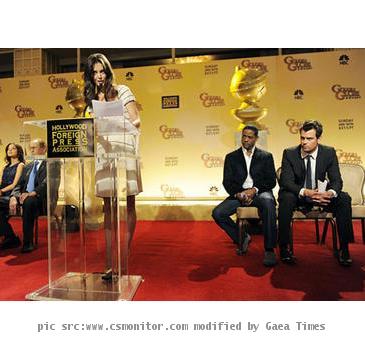 BEVERLY HILLS (GaeaTimes.com)- The nominations for the prestigious Golden Globe awards, often regarded as the front runner to Oscars, have been announced and the viewers are excited about the nominations as is evident from their reactions. The Golden Globe nominations 2011 were announced by the HFPA at California’s Beverly Hills. The presenters for the nominations were actress Katie Holmes and she was assisted by co presenters Josh Duhamel and Blair Underwood. The Award ceremony will be held in Beverly Hills on Jan 16 2011, as it has been scheduled. The nominations for the 2011 ceremony were a blend of the expected and unexpected. The heavyweight contender for the Golden Globe awards for 2011 turned out to be the royal family drama ‘The King’s Speech’. The film starring Colin Firth got 7 nominations in various categories. It was followed closely by Christian Bale starrer ‘The Fighter’ and the much touted FaceBook film, ‘The Social Network’. Both the films got 6 nominations.

The Golden Globe nominations 2011 list also included the Natalie Portman starrer psychological ballet thriller “Black Swan” as well as Christopher Nolan’s latest psychological thriller ‘Inception’. Both the films got nominated for best motion drama. The exclusion of the critically acclaimed True Grit was a big surprise at the nomination round.

The Golden Globe nominations 2011 showed a penchant for established Hollywood stars. Johnny Depp won two best actor nominations for his performances in ‘Alice In Wonderland’ and the latest release ‘The Tourist’. In the best animated feature film segment ‘Toy Story 3′ won a nomination and it seems the probable winner. ‘The Tourist’ got three nominations even though it opened to poor box office collections and also got panned by the film critics.