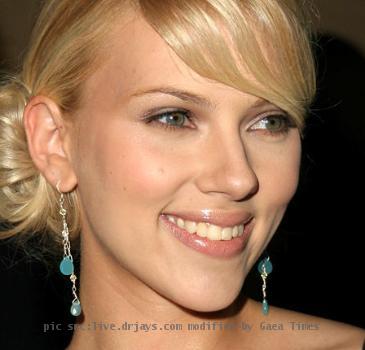 LOS ANGELES (GaeaTimes.com)- Actress Scarlett Johansson known for her svelte figure and versatile acting skills is all set to act in a movie where she will be playing an alien character. This may be exciting news for her ardent fans who love seeing her in different avatars in various films. The actress who turned 26 last month is doing quite well in her professional life even though her marital life is on the rocks now. The pretty actress is finally parting ways with her actor husband the gorgeous Ryan Reynolds who is now the sexiest man alive in the world according to a coveted celebrity lifestyle magazine. After scorching the silver screen with her terrific performance as agent Romanov in ‘Iron man 2′ the actress is going to don the suit of an alien character in her upcoming film named ‘Under The Skin’.

In the sci fi film actress Scarlett Johansson essays the role of a ruthless alien with the capacity to morph into human shape. She uses her seductive skills to woo and ambush her human targets in the flick. The film is an adaptation of a book by the same name written by author Michael Faber. There is some turns and twists in the plot of the book. The character played by Scarlett Johansson in the film works for a huge alien entity which makes use of humans for various purposes.

Actress Scarlett Johansson’s new flick ‘Under The Skin’ will be directed by Jonathan Glazer. The book can be classified as a psychological thriller rather than science fiction. Hopefully it will do wonders for the career of the actress.