Enthiran gets U certificate 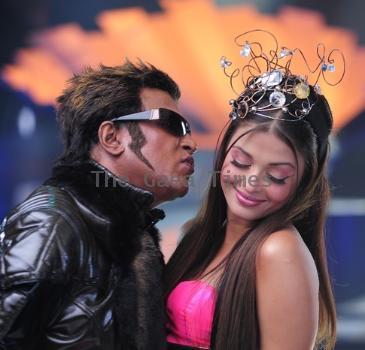 September 16, 2010 (Sampurn Wire): Superstar Rajnikanth’s Enthiran is generating high waves of expectations amongst everyone in town. Apart from Tamil Nadu, lots of Telugu and Kannada films will have a postponed release as Enthiran is scheduled to hit screens by next couple of weeks. Tollywood’s most expected movies – Junior NTR’s Brindaavanam and Mahesh Babu’s Khaleja will have a delayed release.

Meanwhile, fans of Rajnikanth have good news as the film has been passed with ‘U’ certificate. The censor board officials have appreciated Shankar for having made a great film. Sun Pictures will be announcing the release date within couple of days.

As of now, the film is expected to hit screens on September 24 or 30. The promotional campaigns have already kick-started in Telugu and Hindi versions as the songs and trailers are continuously aired in various satellite channels.

Having acquired the rights of Hindi version ‘Robot’ for a record-breaking price, Venus has been marketing the film vigorously.

In Chennai, there will be at least 140 shows to be screened during first week. With lots of multiplexes and theatres being launched in last 2 years, Rajnikanth fans are quite confident that they can avail the tickets by the opening weekend.

Mayajaal multiplex will be screening 60 shows per day while Sathyam Cinemas and PVR Cinemas is planning to screen 25 shows each per day.