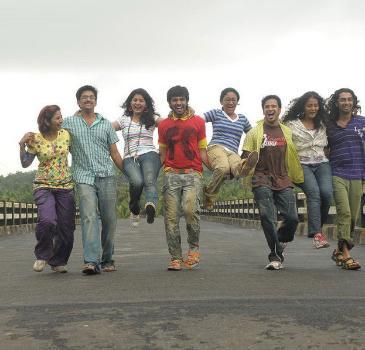 August 17, 2010 (Sampurn Wire): In the past few years, Kalpathy Agoram of AGS Enterprises has churned out some of the best blockbusters. His journey as a producer started with Thiruttu Payale, followed by grand success of Santosh Subramaniam, and the recent release Madharasapattinam. At the moment, the producers of AGS are involved in various productions including Mysskin’s Yudham Sei, Prabhu Deva’s directorial ICH starring Jeyam Ravi and Hansika Motwani, Siddarth’s Bale Pandiya and Bala’s Avan Ivan starring Vishal and Arya.

The production house has now acquired the rights over Prakash Raj’s upcoming production Inidhu Inidhu. The film is a remake of Telugu blockbuster Happy Days and is directed by cinematographer-turned-filmmaker K.V. Guhan.

The film is hitting theaters this Friday (Aug 20) and AGS is planning to release the film with more prints. With Karthi starrer Naan Mahaan Alla also releasing on the same day, one can expect a great box office combat between these two films.

However, when it comes to pre-release expectations, Naan Mahaan Alla has drawn more attention than Inidhu Inidhu. Almost all the songs of NMA have turned to be chartbusters while none of the songs in Inidhu Inidhu have got into Top 10 list.