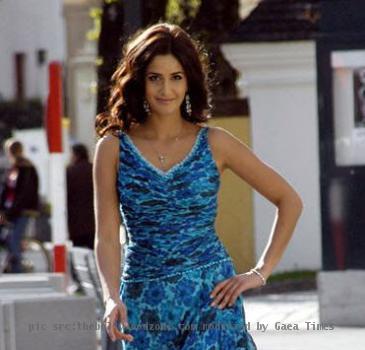 MUMBAI, INDIA (GaeaTimes.com)- Katrina Kaif, who is now the numero uno heroine of Bollywood, at least in terms of the number of hits that she delivers, will now sizzle the big screen in an item number. The new song will feature the Bollywood beauty matching her steps to a belly dance. According to reports circulating in the media, the item song for which Katrina Kaif will be seen dancing is from the upcoming Farah Khan project titled “Tees Maar Khan”.

Katrina Kaif may have been shown the door by her boyfriend Salman Khan who refused to work with his girlfriend in the next Atul Agnihotri movie, but every other director and actor are very much keen to have the actress as part of their movies. In a statement released to the media, Farah Khan who has choreographed and directed Katrina Kaif in “Tees Maar Khan” says that the actress was not only good to work with but also came as a big surprise. Farah Khan feels that Katrina Kaif is one of the most ambitious and hard working actress in Bollywood and that she is already looking forward to working with Katrina Kaif again!

“Tees Maar Khan” features actor Akshay Kumar in the lead role. While Katrina Kaif has won accolades for her non glamorous role in her previous film “Raajneeti”, this time on she will sizzle the screen in her glamorous best. Farah Khan says that she has appointed a belly dancing teacher to train Katrina Kaif in the nuances of the dance form. It is also being said that the actress has been approached by the Commonwealth Games organizers to perform at their opening ceremony.