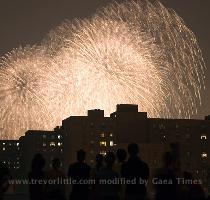 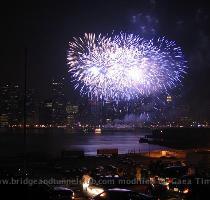 MANHATTAN (GaeaTimes.com)-Macy’s Fourth of July Fireworks 2010 turned out to be a spectacular and star studded event. On Sunday night as the whole of the United States joined hands to celebrate the Independence Day,Macy’s Fireworks only made the occasion all the more special. The community took care to bring some of the most well known singers on board as the fireworks lit up the sky above the Hudson River. Live on the deck of the Norwegian Epic cruise liner were teen singing sensation Justin Bieber who headlined this year’s Macy’s 4th of July Fireworks spectacle. Along with him were other singing sensations like Enrique Iglesias and LeAnn Rimes. Some of the star-casts of the “Twilight Saga: Eclipse” also made it to the deck.

If people jived to the singing of Justin Bieber and Enrique Iglesias along the Manhattan West Side then, there were millions more who enjoyed the Macy’s 4th of July Fireworks 2010 on television as it was aired live by the NBC Networks on Sunday night. Although there were many who celebrated the occasion at home with family members and friends many came out witness the spectacle with their own eyes with hope that it would be “even better” to see it live.

There is no doubt about the fact that the Macy’s 4th of July Fireworks 2010 lived up to the expectation of the thousands who came up all the way to the bank of the Hudson river to mark the occasion. The red, blue yellow and white fireworks with each different from the other and gigantic in size made it a thing of beauty.