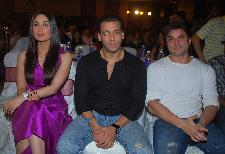 The film cast and crew, Salman Khan, Sohail Khan and Kareena Kapoor, along with Bappi Lahiri, music directors Sajid-Wajid and director Prem Soni officially launched the music of their much-awaited romantic amidst fun and humour. The much talked about movie is all set to sizzle on screen on 16th October 2009.

The event started off with Prem Soni hosting the event followed by the screening of the songs, and interactions with the media.

Kareena Kapoor dazzled in her purple dress and as usual Salman and Sohail looked at their best. Speaking to the media Kareena Kapoor said, I have known Prem since the past eight years.

Elaborating about her bond with the Khan family Kareena said that her sister Karishma has always been close to Salman. We have been family friends for years. That is why I chose to do this film. Also, I have a role that I havent done before. My character is strong representing todays thinking woman. When narrated the script to me I knew I had to this film.

The evening, however, changed its shade the minute Salman took to the  mike. As usual Salman entertained the media with his funny one-liners.

Salman continued to pepper the evening with humour. Salman said he was very happy that the movie has shaped up very well and is flattered by the way Prem Soni has directed it. Salman had words of praises for Kareena Kapoor and Sohail Khan on their acting abilities.

Main Aur Mrs Khanna marks the debut of Bappi Lahiri as an actor. Sohail Khan who is a producer and an actor in the movie said, He is very happy that UTV has trusted the project and invested on the project. He always enjoys working with Salman bhai, and with Kareena Kapoor as usual they have given a brilliant performance in the movie.