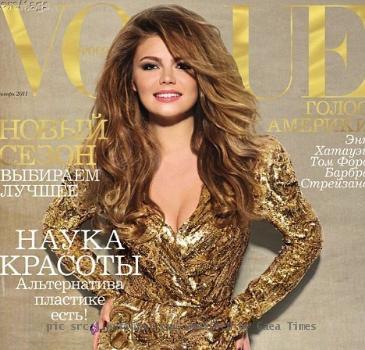 MOSCOW (GaeaTimes.com)- A gymnast and then a politician. Was that not enough for the allege “mistress” of Vladimir Putin, that she had to pose for the “Vogue” magazine? 27 year old Alina Kabayeva, is regarded as one of the most flexible ladies in Russia, for her continuous switch in career, from an athlete to a politician, to a model and now a “Vogue” model.

Recently, the new Editor in Chief Viktoria Davydova, took the decision of featuring Alina Kabayeva in their magazine cover for the January issue. Many people are under the impression that she has not done anything significant recently, to get featured in it. When she actually deserved to, as an Olympic gymnast a few years ago, the apparently more sensible editor of the magazine, Aliona Doletskaya, did not feature her in “Vogue”. A famous source has reported that none of the readers are very pleased with the cover. One of the loyal readers even called it “downgrade”. She added that she has no clue what on earth prompted them to feature Alina Kabayeva in the magazine cover, and what were they thinking about when they picked her up. Many more people have the opinion that perhaps Viktoria Davydova was intending to give a competition, to her Western competitors, who use contentious role models to increase their magazine’s demands.

Alina Kabayeva has posed for the magazine wearing a gold Balmain gown. However, although it was intended to be sexy, it was not at all impressive, as her expressions looked more like a “despo” than an enigmatic babe, that Vladimir Putin considers her to be. However, the bigger irony is that, the same dress has been used for other publications too, and had no surprise element in it. Is Vladimir Putin not sponsoring her wardrobe anymore?

BERLIN - Alina Treiger, the first woman rabbi in Germany since the Holocaust, was ordained by libera...

MOSCOW, RUSSIA(GaeaTimes.com)- In a sensational development Vladimir Putin the Prime minister of...

LONDON - Russian Prime Minister Vladimir Putin has apparently split from his wife Ludmilla and is ...

France to send 93 Gypsies back to RomaniaPARIS â France was deporting nearly 100 Gypsies, or Ro...

Russian cruise ship carrying US, German tourists collides with barge on Volga, no one hurt

7 crew reported dead in Israeli chopper crashBUCHAREST, Romania â All seven people aboard an Is...
Copyright© 2010 The Gaea Times