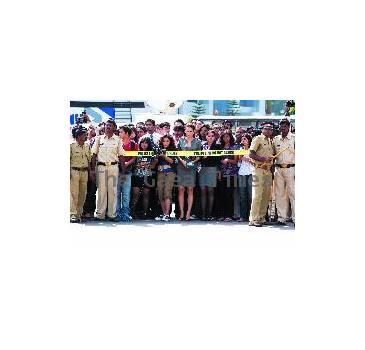 October 1, 2010 (Sampurn Wire): This October, get set for some mind-blowing thrill and action as AAP Entertainment Ltd. and Sohail Maklai team up to enthrall the audiences with their forthcoming ‘KnockOut’.

Showcasing yet again, his passion for versatile roles, Sanjay Dutt plays a new age lone ranger in this film. He has the latest weapons and gadgets at his fingertips, and is a man who trusts and depends on no one. Working alone, he effortlessly uses his wit, his skills at hand-to-hand combat, and his love for stealth technology, to manipulate and trap his elusive target.

Irrfan Khan essays the role of the target, a street-smart investment banker who has made his way to the upper ranks of power and is a man consumed by his own obsessions. He is a survivor in a world of runaway desire. A world that looks glossy on the surface- sexy cars, sexier women, designer watches, luxury villas… a world of senseless fulfillment, endless greed.

Stunningly beautiful, immensely talented, Kangana Ranaut is lady has a power and quality of her own. She plays a hardnosed television journalist who is faced with the ultimate call of conscience. Driven by a desire to know the underlying truth, she will stop at nothing, and nothing can stop her.

The Story/Screenplay of the movie has been penned by Mani Shankar while the Dialogues are by Shiraz Ahmed. The action sequences have been choreographed by Allan-Amin. The Executive Producer is Hussain Shaikh and the film has been co-produced by Nag.

Through a brilliant play of truth and pretense, KnockOut unravels a tangle which can only be loosened in one way…leading to the biggest ‘counter-heist’ in the history of this nation. The film which promises to wake up audiences, in a way never witnessed before, is slated to hit theatres on 15th October 2010.

GUANGZHOU - The Indian men's and women's team were outclassed in their pool matches Monday to find t...

WASHINGTON - A team researchers, including an Indian-origin boffin, has discovered a new cellular...

Fat outside of the arteries linked to cardiovascular disease

WASHINGTON - A new research has found that fat around the outside of arteries may lead to the ...

LONDON - WBA champion David Haye may be in trouble with boxing chiefs despite withdrawing his ...

LONDON - It seems boxing legend Mike Tyson has found a new sport he is good at - conkers. The ex-wor...

GUANGZHOU - India qualified for the pre-quarters of the under-23 football tournament of the Asian Ga...

BERLIN - Bayern Munich and Chelsea both booked their places in the knockout phases of the Champions ...