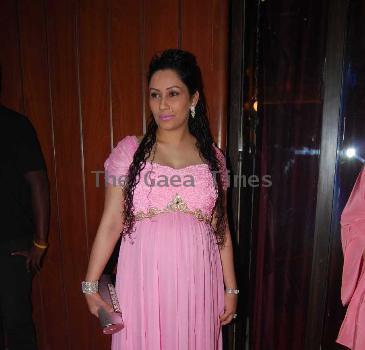 September 15, 2010 (Sampurn Wire): Ameesha Patel hosted a grand baby shower for best friend Maanyata Dutt, who is expecting twins, at a plush lounge, Veda, in South Bombay. At this party, the cuteness quotient was 100 percent. It had to be, considering the occasion was so special. The entire event was meticulously planned by Ameesha, Minica Chabria and Sejal Shah.

Special invites were sent for the occasion which read ‘Double trouble is here’. This invite included a box of cupcakes and a cute poem. The guest list included Maanyata’s closests friends,Sophie Choudhary, Neha Oberoi, Vidya, Krishika Lulla, Sheeba, Malaika Khan, Maana Shetty, Jaya Pradha and sister-in-laws Priya Dutt and Namrata Dutt. Everybody present followed the ‘Pink and Blue dress code’ which was the theme for the party. It was truly a designer bash with renowned designer Rohit Bal who was behind the decor and the elaborate arrangements at the party.

Shilpa Shetty Kundra was one of the first guests to arrive sans husband Raj, who later walked in with Sanjay Dutt who entered the party a few hours later with his friends. The food spread was elaborate and everybody couldn’t stop raving about the glow on Maanyata’s face who looked pretty in custom made pink gown. It was a wonderful evening full of fun and games that left everybody with a smile on their faces!

By Subhash K Jha It was a night to remember. While Sanjay Dutt glowed when one of his sister Namrata...

By Subhash K Jha On his birthday, which falls on July 29, Sanjay Dutt feels very charitable towards ...

Sanjay Dutt puts his Bday on hold for Amar Singh