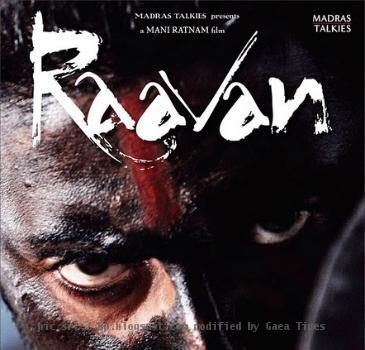 Its been a couple of months since we are watching the trailer of Raavan and counting days for it to hit the silver screen. All our waiting and excitement surrounding Mani Ratnam’s Raavan ends today as it releases today on June 18, 2010.

So far, Abhi-Ash had done seventh movie together, including Raavan. Although they didn’t click in Dhai Akshar Prem Ke, Kuch naa Kaho, Umrao Jaan as reel life couple, in movies like Guru and Sarkar Raj their chemistry was very much appreciated by the audience.

In Raavan, people will get to see a portrayal of their favorite mythologies, The Ramayan. Abhishek is playing the character of Beera, who kidnap Ragini (Aishwarya), wife of a Super Cop Dev (South star Chiyaan Vikram). Unlike Ramayan, here Sita, I mean Ragini falls in love with her kidnapper ‘Raavan’. Beera also has a conflict going into his mind regarding Ragini. He refuses to kill Ragini.

Aishwarya looks graceful portraying the role of a classical dancer. Her acting in the perplexing situation especially, after being kidnapped, captivates the audience.

The Tamil version of Raavan is titled as Raavanan starring Vikram and Aishwarya, while the Telugu movie is coming with the title Villain.

I was ignorant about Chittagong uprising: Abhishek Bachchan

SHIMLA - After box-office dud "Raavan", Abhishek Bachchan is returning to the big screen as freedom ...

MUMBAI, INDIA (GaeaTimes.com)- The competition two of the most popular Bollywood actresses namel...

Aishwarya Rai Bachchan Back In News!