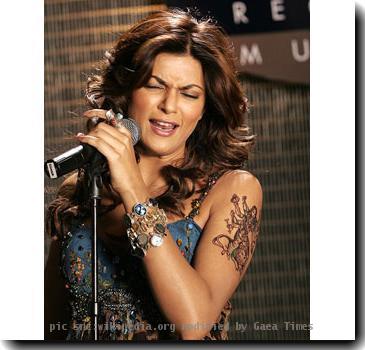 MUMBAI - A photo of director Mudassar Aziz carrying Sushmita Sen on his shoulders during the Caribbean shoot of their film “Dulha Mil Gaya” has been splashed all over the Internet, creating much buzz. Though it looks like a romantic episode, the reality is completely different.

The crew had specially created a ramp that extended into the Caribbean Sea for a shoot, along with a 50-metre walkway and it apparently got washed away by a storm. While the ramp was made again, recreating the walkway would have delayed the shoot due to which the cast and crew had to wade through waters till the ramp.

“Due to her costumes and make-up, she (Sushmita) wasn’t expected to traverse the sea on foot to reach the ramp,” producer Viveck Vaswani told IANS.

“She would have made some reasonable comments like ‘can’t shoot’, ‘too difficult’ or ‘make a walkway’ and that wouldn’t have even constituted as starry tantrums. However, all credit to her professionalism, she was sport enough to be carried on Mudassar’s shoulders. The two being good friends further eased the situation,” he said.

The fact is that it wasn’t just Sushmita who was transported in a similar fashion.

“Though a picture of Sushmita being carried by Mudassar is being splashed all over, making it look like a romantic episode, the fact remains that the young director with help from other crew members was also carrying sensitive filming equipments. This is not all as the art director, who is a senior lady and had hurt her back, was also being ferried in a similar way,” said a source from the crew.

All this pain had to be taken by the crew to shoot the film’s title sequence featuring Sushmita on the specially created ramp.

“We did recreate the ramp but for the walkway we had two choices. Either construct it and hence delay the shoot by at least a day or somehow think innovative and reach the ramp for the shoot. We opted for the latter though the process had to be repeated not just for Sushmita but others as well,” said Vaswani.

While Sushmita refuses to react to rumours, Mudassar says it is easy to sensationalise things.

“I really don’t have much to react on something as frivolous as this. There are so many beautiful moments attached with ‘Dulha Mil Gaya’ and something like this hardly deserves more attention and focus,” Sushmita told IANS.

Mudassar said: “It is easy to sensationalise a simple picture. However, the sheer hard work and sweat that goes into taking a simple shot is something that only those people can explain who have gone through the entire tribulation.”

KOLKATA - The Bharat Coking Coal Limited, a subsidiary of the countrys largest miner Coal India, has...
Copyright© 2010 The Gaea Times