A. K. Hangal Gets Help From MNS 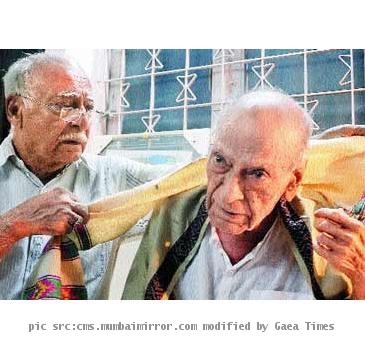 MUMBAI, INDIA (GaeaTimes.com)- Despite the fact that veteran character actor A. K. Hangal has been associated with the Hindi film industry for decades and has an acting career spanning across over 200 films, the noted actor has to spend the last stage of his life battling financial problems. At 95, the actor who is best known for edging the character of Rahim Chacha in the blockbuster ‘Sholay,’ has to confront illness, a fading memory as well as financial hassles as his family is trying desperately to pay for his medication. After the dismal plight of the veteran actor came to light, Mumbai based Maharashtra Navnirman Sena (MNS) came forward to help him financially.

Earlier this week, Ameya Khoppkar, the president of Maharashtra Navnirman Cine Workers’ Association (MNCWA) gifted A. K. Hangal a cheque of Rs. 52,000 while it was also declared that the party would be bearing all the medical expenses of the renowned actor. While talking to reporters later, the MNCWA president said that when the party came to know that the actor is ill and is in desperate need of aid to meet his medical expenses, the organization took the decision to take the initiative.

The financial aid that has been forwarded to A. K. Hangal is the beginning of programme that has been undertaken by MNCWA to help the veteran Hindi and Marathi actor who desperately need financial aid. At the same time, it has also been revealed that the organization intends to hold a charity event in a bid to raise funds for the senior actors of the film industry.