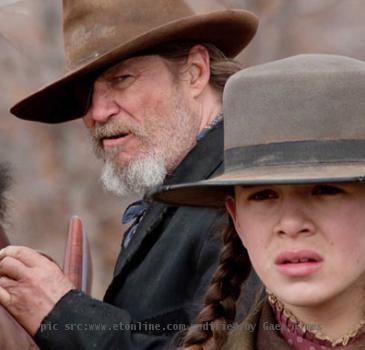 LOS ANGELES, (GaeaTimes.com)- Academy-award winning brothers, Ethan and Joel Coan’s remake of “True Grit” is a huge hit at the box office in North America. The film grossed $110.4m (71.1m) both in the US as well as Canada. The movie to come second in the box office ratings is the comedy movie, “The Little Fockers”. It grossed an amount of $13.7m (8.8m), according to the figures shown on Sunday. “True Grit” originally had cult actor John Wayne playing the lead. The remake became the first western movie to cross the $100m mark since 1990s.

John Wayne played the lead in the original version of “True Grit” which released in 1969. The recent version made by the Coen brothers, seemed to be as good as the original version. Jeff Bridges plays the character previously played by John Wayne. He portrays an alcoholic U.S. Marshall Rooster Cogburn, who with a Texas ranger (played by Matt Damon) help a stubborn 14-year-old girl in tracking down the killer of her father. The plot of the movie has grasped viewers almost from all over North America and within a week, the tickets are being sold at an alarming rate. It is no wonder that the film crossed the $100m mark. Winning several awards, the film is also being considered to be nominated for the Oscars.

John Wayne’s remake version of “True Grit” has successfully left behind “The Little Fockers” leaving it to fall to second place with $13.7 million after remaining at the top of the box office for two weekends for a total of $124 million since it released.