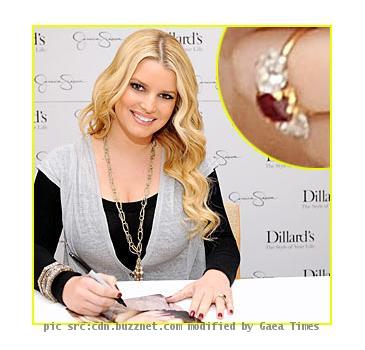 The 30 year old singer was at Dillard’s department store in Kansas city on Saturday and there she was seen sporting a beautiful ring that features a central ruby flanked by two diamonds. The ring is an exclusive one from Neil Lane according to the onlookers.

The news of her engagement with Eric was announced on last Thursday. The couple will enter into the wed lock soon and both of them will be marrying for the second time. interestingly the news of their engagement was declared just months after Jessica’s ex-husband Nick Lachey announced his engagement to Vanessa Minnillo.