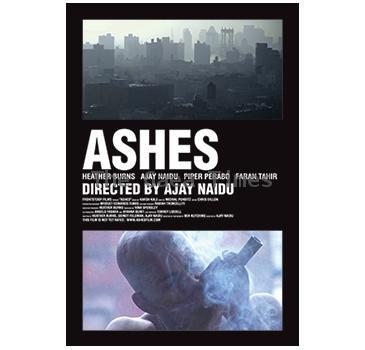 October 1, 2010 (Sampurn Wire): How do we ignore the deterioration of a person or a neighborhood that is right in front of our eyes? Ashes is a cautionary tale of mental illness, greed, and the definition of family both real and imagined. The story of two brothers living in the inner city, as one descends into the grips of manic depressive schizoid disorder, the other, Ashes, absconds from his responsibility and tries to become a wealthy drug dealer. Fraught with contradiction, the story is a meditation on how easy it is to fall through the cracks of today’s health care system and how we ultimately find grace in the face of suicide.

Ajay Naidu grew up in Chicago where he worked extensively as an actor in both film and theatre from a very young age. He is a graduate of the American Repertory Theatre’s Institute for Advanced Theatre training at Harvard University. He has appeared as an actor in over 50 films and television projects. He was nominated for an Independent Spirit Award in 1996 for his performance in Rick Linklater’s film Suburbia. Ashes marks his directorial debut.