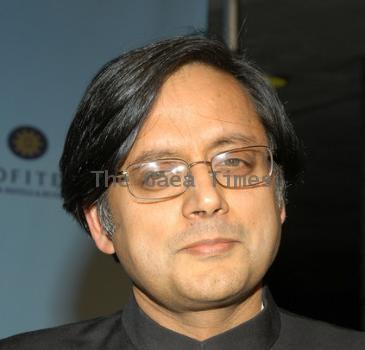 September 9, 2010 (Sampurn Wire): The renowned political figure of India, Shashi Tharoor has a long Bollywood connection. Tharoor wrote a tell-all novel on Bollywood, which is titled ‘Show Business’. It was written by him almost 18 years back, when he was a practicing author. Tharoor planned to expose a lot of secrets of the industry.

Now, the latest buzz is that Tharoor’s 17-year-old son stepson Shiv, from his third wife Sunanda Pushkar, has Bollywood dreams. Shiv’s father Sujith Menon died in a road accident. He was an entrepreneur in Kerala.

The young chap has got himself admitted at veteran actor Anupam Kher’s acting school. He has been undergoing training there since last few months. However, the newlywed couple is keeping the Bollywood debut of Shiv a secret for the time being.

Confirming the news, Anupam Kher was quoted saying that Shiv has actually got enrolled in his acting school. Kher added that the boy is a very talented one and good looking like all Kashmiris (including me, said laughingly). The veteran seemed very confident about the bright future of this boy.

Anupam was also invited at the wedding reception of Sunanda and Shashi Tharoor on September 3 in Dubai. In fact, Sunanda is also a Kashmiri. Speaking on this, Kher said laughingly that it was not the reason but he knew Sunanda because her son Shiv Sunanda is a student of his acting school.

NEW DELHI - Prime Minister Manmohan Singh Saturday said the people will come to know as and when he ...

Why not ask Yeddyurappa to quit, Congress to BJP

THIRUVANANTHAPURAM - Music, political activism and a messianic zeal to put sub-Saharan Africa on the...

THIRUVANANTHAPURAM - The three-day long Hay Festival began in Thiruvananthapuram with many eminent a...

THIRUVANANTHAPURAM - Kerala became an important destination on the world literature map Friday with ...

KOCHI - A crucial board meeting of the state-run Air India will be held here Thursday to discuss rel...