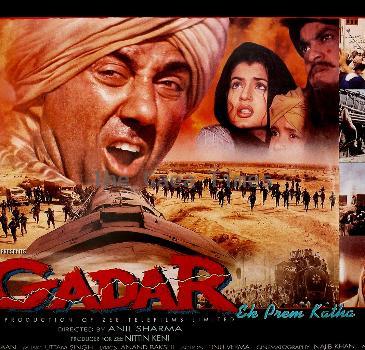 August 11, 2010 (Sampurn Wire): There seems to be a very thin line demarcating the war films, the historical films or even the patriotic films of the Hindi cinema, in a way all these three categories are totally interlinked. As the real or even the reel life warriors have always fought the various battles out of sheer patriotism, for the intense love for their country and have then become historical figures in the process.

And then with the advent of the color era it was Manoj Kumar, more popularly known as Mr. Bharat, who had totally dominated the patriotic scenario in 60s and 70s firstly by acting in a black and white film titled Shaheed in the year 1965, in which even the late prime minister of India Pandit Jawaharlal Nehru had made a special appearance, and secondly by going on to make more and more such patriotic films in color like Upkar, Kranti, Purab Aur Paschim , Roti Kapda Aur Makaan et al and, of course, all his films not only emphasized but also reflected his intense patriotic fervor and even his deep rooted love for his motherland, India. In fact Manoj Kumar was to patriotic films, what the Ramsays were to horror films.

Then it took a Hollywood director like Richard Attenborough to rekindle the patriotic loyalty of Indian’s by making a celluloid masterpiece film Gandhi starring who else but a Hollywood actor Ben Kingsley in the title role. No wonder then, that the Indian directors followed suit with Shyam Benegal leading the brigade, when he made a film titled The Making Of The Mahatma starring Rajat Kapoor in the title role of Mahatma Gandhi.

(Not to speak of the Ajay Devgn starrer of the same name but made in the 90s decade) starring Dharmendra and the late Priya Rajvansh besides a host of other stars of that era. Then there were also films like Hum Hindustani starring rank newcomers and producer- director Mehboob Khan’s film Son Of India also starring newcomers.

While some of the other such patriotic films of the 40s and the 50s include Pyara Watan, Hum Dono starring the evergreen Dev Anand in a double role, Sher-E-Watan, Hind Ke Lal, Hamara Watan, Hamara Desh, Hindustan Hamara, Bharat Ke Lal, Bharat Ki Beti and the most talked about film of that era namely Dharti Ke Lal. And a series of films, of the duo the late Mehmood Ali - I. S. Johar starrer like Johar Mehmood in Goa, Johar Mehmood In Hong Kong etc. etc. etc. Yet all these films were like just a few drops in an ocean.

Cut to the decade of the 60s to the 90s where apart from the Manoj Kumar brand of patriotic films there were other notable films too like 5 Rifles, Leader, Jhanda Ooncha Rahe Hamara, Desh Ke Dushman, Rajesh Khanna starrer Apna Desh, Azaad Desh Ke Ghulam, Bharat Ke Shaheed, Mithun Chakroborty starrer Watan Ke Rakhwale, Kamal Hasan starrer Mayor Saab (Dubbed version of the original Tamil film} and then even the mighty Big B had acted in a couple of such deshbhakti oriented films like Desh Premee, Inquilab, Main Azaad Hoon, Hindustani, Hindustan Ki Kasam, Major Sahab, and Khuda Gawah. Besides how can one forget the midget hero Aamir Khan’s earlier film Sarfarosh and the last released patriotic saga Lagaan albeit being a little off track.

Besides how can one overlook the Punjabi Jat Dharmendra and director Anil Sharma’s contributions in this field as together the duo have given quite a few of such hit films like Elaan-E-Jung, Hukumat, and Tehelka. Dharmendra on his own did Ramanand Sagar’s films like Aankhen and Lalkar. Next, following the footsteps of his father even Sunny Deol has served his own doses or rather sometimes overdoses of patriotism from time to time with a few notable films like Indian, The Hero, Zor, Gadar - Ek Prem Katha and many more besides the dud caper Jaal - The Trap.

In between there were other such highly impressive films too like the Nana Patekar starrer Krantiveer directed by Mehul Kumar, Krantishetra and Sardar. While last released patriotic film turned out to be Subhashchandra Bose. Incidentally the last two films were directed by Shyam Benegal that had also given a great insight into the life and times of these patriotic leaders of our nation.

A special mention at this juncture should also be made of the Vidhu Vinod Chopra film 1942 - A Love Story starring Anil Kapoor and J. P. Dutta’s film Border and LoC – Kargil starring a galaxy of Bollywood stars.

And finally in the new millennium one also witnessed a new trend of patriotic filmmaking. In fact a mad rush to jump onto the bandwagon of simultaneously making films based on one subject, especially on one particular patriotic figure was witnessed. It was revered martyr Shaheed Bhagat Singh. Hence as many as 5 films were made on the legendary cult figure, namely Tips films The Legend Of Bhagat Singh starring Ajay Devgn, Dharmendra’s home production banner Vijeta films 1931 Shaheed Bhagat Singh starring Sunny Deol as Chandrashekhar Azaad and Bobby Deol in the title role. Shaheed -E-Azam Bhagat Singh starring a rank newcomer Sonu Sood, besides two other unreleased films with inane titles which incidentally also got dumped into the trash cans of the cine laboratories of Mumbai.

Not only this, believe it or not, there were as many as 5 films being made on another legendary political figure. She is late Indira Gandhi. But nothing of those films was heard after its initial launch with a big fanfare.

Besides the small screen also took part in the rat race of this patriotic wave in its own version way. The patriotic brand of tele-serials like ‘Kashmeer’ on Star Plus channel which was later on unceremoniously pulled off the air midway and then there was ‘Mulk’ on Zee TV Channel which had also suffered the same fate.

To round it off on a patriotic note, all the satellite channels are now in the mad rush of being one up on each other, as each one of them are drawing up their own schedules and plans to telecast most of the past patriotic films of those times to commemorate the eve of the 63rd Independence day on August 15 of this year. Period!