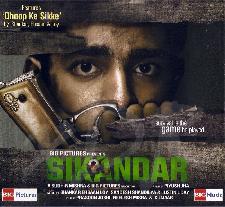 Piyush Jha has come home. Ten years ago he made a spoof film Chalo America about the compulsive and rampant NRI-ship among young Indians. Now Jha is totally on home turf with a film about a burning Indian issue. Sikandar takes us into the heartland of Kashmir militancy and was shot completely on location to the sound of booming guns and screaming bullets. That a filmmaker of Sudhir Mishra’s strong political leanings had enough faith in Piyush to let him do a film on Kashmir says it all. Piyush Jha talks to Subhash K Jha.

Sikandar takes you to the ‘forbidden’ land of Kashmir. How was the experience of shooting in the volatile valley?

My experience of shooting in Kashmir was really most pleasurable. I enjoyed Kashmir thoroughly. What I’m depicting in the film based on my research is that militancy is on the wane in Kashmir. This was borne out by the fact that I had a smooth shoot in the valley. Nowadays, militancy is limited to the border areas and perhaps today the truth is that Kashmir, is in most parts- safe, and yes it is still one of the most beautiful places on the face of the earth. You will see this beauty in my film. ‘Sikandar’ is a post-card to Kashmir, which contrasts the visual beauty with the cruelty of the goings on of the last 20 years.

Shooting with kids is never easy. You were shooting with Parzaan Dastur and Ayesha Kapoor who once were kids in popular roles and are now gawky teenagers. Was that a hard thing to deal with?

In fact the reason that I cast Parzaan and Ayesha was that I found that they had not only the required skill set of being comfortable in front of the camera, but also had a long enough hiatus to bring a freshness into their performance. They are gawky in a way, but that was what I needed for the roles, so I used their gawkiness to maximum advantage for building their on-screen characters. Although both of them are young, they have a maturity way beyond their years and their ability to respond to a director’s instructions is that of seasoned professionals.

Many units including Rahul Dholakia’s Lamha has faced huge amounts of trouble shooting in Kashmir. What about you?

My own experience was that of a smooth shoot, without any disturbances or glitches. The local people were very supportive to our efforts. Perhaps, we were able to relate to them well. Our local production managers and assistants were drawn from the pool of people who were very professional in their approach, and we had a dream run while the shoot lasted.

What was your tryst with terrorism like? Do you think film units can ever go back to the days of Kashmir Ki Kali and Junglee in the Valley?

Wherever we went, we were shown locations and told that this location was used in this film, that location was in so and so song etc. For instance we shot in the beautiful ‘Betaab Valley’ near Pahalgam, so named because the film ‘Betaab’ was shot there. In another place I was shown the temple used in the song ‘Jai Jai Shiv Shankar’ from the film ‘Aap ki Kasam’. The Kashmiri people are very proud that so many films were shot in the valley, and sad that for the past so many years film crews have not visited them. They are looking forward to film crews going back. People on the streets would shout to us as we walked by "Send more film people back. Tell them that we miss them"

There have been recent films on terrorism in Kashmir from Mani Ratnam’s Roja and Dil Se to Shoojit Sircar’s Yahan. What is your take on them?

So, what goes through our minds when see hear the word “Kashmir”? Nine times out of ten, it will invoke images of AK-47 wielding young terrorists. We will shudder if any of our friends suggest going for a holiday to Kashmir. We will dismiss Kashmir as a “problem”: someone else’s problem. I want to show that the average Kashmiri has absolutely the same aspirations as the average person from Bihar, Andhra Pradesh or Maharashtra, that is, upward mobility. The average Kashmiri kid wants to be a Doctor-Lawyer-Engineer and-or Shahrukh- Sachin- Bhaichung. He wants the latest Mp3 players, 24 hrs Hi-Speed broadband, and wants to take part in Reality Shows. In other words, the average young person is not oiling his AK-47 for the next strike, but is waiting for the rest of the country to accept him into the national mainstream.

In the recession- hit scenario do you think audiences are open to the idea of watching films about the grim political reality?

In fact, ‘Sikandar’ is not a "grim-political-message oriented" film. ‘Sikandar’ is an exciting suspense-thriller. Although I have explained the political reality of Kashmir in my answers to you above, I have kept the politics of Kashmir in the background in the film. In the foreground, is a universal human story about a protagonist caught in a web of intrigue from which he tries to extricate himself and while doing so, gets further and further embroiled. I myself get bored with ‘heavy political dosage’ films. I, like most people, go to watch movies that thrill or excite me and give me a cinematic experience and therefore I think, like me, the audience at large likes to watch engaging screen stories, then whatever be the circumstances around them.

You earlier made a film called King Of Bollywood, which got a severely limited release. Do you think films by directors from outside the film industry have it easier than those who are born into film families?

I think film directors have a tough time making the films they truly want to make, whether the directors are from film families or not. The demands of the market are so strong that we are forced to bend towards a certain kind of filmmaking format that will appeal to the universe. However, in recent times we are seeing that this audience universe has got very choosy about the kind of films it likes to see. I think with the recent success of films which broke new ground, things are really looking up for all kinds of film making talent that’s looking to find their individual expression.