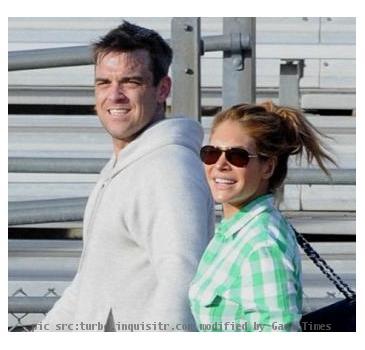 LONDON - Singer Robbie Williams claims he is negotiating with his wife Ayda Field about expanding their family together.

“Me and the missus are negotiating at the minute about having kids. She wants to go now, and I’m like ‘No, let’s go around the world and enjoy ourselves,” femalefirst.co.uk quoted him as saying.

Robbie admits he has never been happier since tying the knot with Ayda.

“I’m very fortunate to have the life I’ve got. I’ve got an amazing wife, we have a very uncomplicated relationship, eight doggies, live out in Los Angeles in the sun - it’s a good life. So whatever I do now - it’s got to be a laugh,” he said.

Robbie, who has joined back his band- Take That, says it’s a great feeling to be around Gary Barlow, Mark Owen, Jason Orange and Howard Donald again.

The 36-year-old singer, who quit the band in 1995 to launch a solo career, said: “I’m in love with the story of it all. To be honest I wouldn’t be doing much if it wasn’t for them anyway. We all got together and sorted out our differences, and listened to the ‘Circus’ album that they did and the live show and they looked like they are having so much fun.”